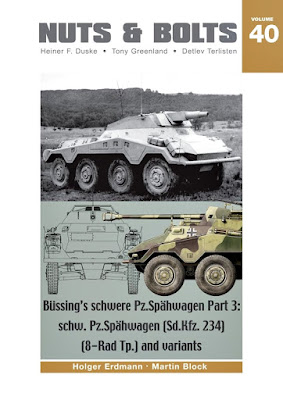 365 photos, of these 175 contemporary photos from manuals, combat and war fronts in b/w, most of them previously unpublished;
150 colour photos of restored vehicles and their components in public and private collections,
40 colour photos of the four models from T.Greenland & V. Branigan, English / German captions,
58 pages English / German text with 5 tables,
28 pages of scale drawings of all versions and details in 1:35 scale from Lieven DeConinck,
18 camouflage schemes from Carlos Vaquerizo with tactical and units signs, for the first time detailed camouflage scheme of the production companies,
3 tables of organization of units (Kriegstärke-Nachweisungen KStN) having these vehicles in their arsenal

The Sd.Kfz. 234 (Sonderkraftfahrzeug 234, Special Purpose Vehicle 234), was a family of armoured cars designed and built in Germany during World War II. The vehicles were lightly armoured, armed with a 20, 50 or 75 mm main gun, and powered by a Tatra V12 diesel engine.

The first two volumes (Nuts & Bolts No. 35 and 36) in the 8-wheeled armoured car series of the Wehrmacht, did not describe the complete story of these impressive 8-wheeled vehicles, since they dealt exclusively with variants on the Büssing-NAG chassis GS. Even before the impending military operations in North Africa, the military leadership demanded an armoured scout vehicle, better adapted to the climatic conditions, the great distances and the tactical requirements of a desert war than the vehicle family on the GS chassis, and therefore awarded the contract to Büssing-NAG for the development of a successor type, which was based on the Tp chassis.
Now with the release of Volume 3 the rest of the story can be told.

The book starts with the development of the vehicle plus variants that were also produced. What is covered after this is information regarding production, unit history, camouflage & markings etc...(See contents below for other sections covered) This takes up 1/4 of the book.

The various sections of the book are: 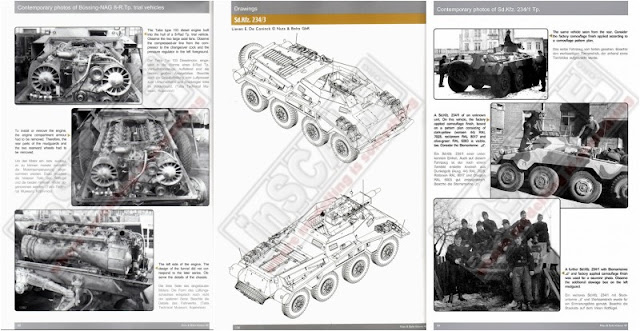 The last 3/4 is the main, in my opinion, the best part containing the Contemporary photos, 1/35 scale drawings of all variants. This is followed with colour profiles of various types and camouflage and markings. Next up we find an excellent section on preserved vehicles and components covering internal areas plus the engine.

The book finishes with a selection of built kits from Tony Greenland and a super detailed build of a Sd. Kfz. 243/3 by Vinnie Branigan.

Conclusion
As with past volumes of Nuts & Bolts you find a very thorough and detailed description of a vehicle that is being covered. The photos and information gathered and presented in this volume is first rate and does a fine job at providing the development and history of the Sd.Kfz. 234 series. Combine Volumes 35 & 36 and you will have an excellent description of these vehicles.

Well worth the money!

Many thanks to those at Nuts & Bolts for this copy to review. 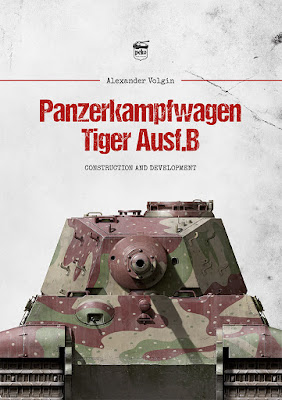